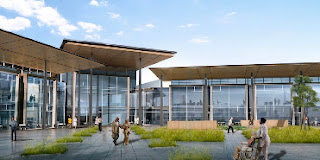 On October 18, 2012, the residents of Alameda learned second-hand about the details of the Veterans Administration’s plans for a clinic and columbarium at Alameda Point.

According to an article published in the Oakland Tribune, the VA briefed the Alameda County Veterans Affairs Commission.

“ ‘The clinic's design will feature a glass-fronted lobby that will face the skyline, plus an overhanging winglike roof that architect Greg Lehman said was inspired by the bird colony and the site's history as part of the Alameda Naval Air Station. People visiting the clinic will have views of San Francisco,’ Lehman said Monday, when the veterans commission was updated on the project. ‘We also wanted to capture as much of the natural light as possible.’"

In addition, “The two-story clinic will measure 158,000 square feet on 30 acres and will replace the VA's current facility on Martin Luther King Jr. Way in Oakland.”

Meanwhile, Alameda residents have yet to be briefed.


The design work is part of an $8 million contract with HDR Architecture of San Francisco for design and construction documents for the Alameda Point project.  An Environmental Impact Statement evaluating alternative locations at Alameda Point has not been prepared.  It appears that the land transfer from the Navy to the VA is on schedule for next summer without fulfilling the customary requirement for alternative site evaluations before spending federal funds on a project. 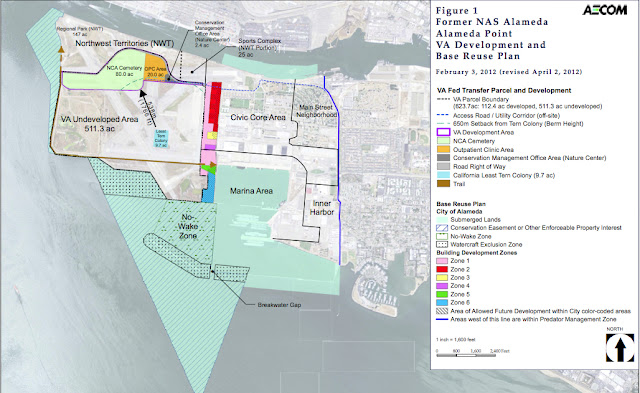 Draft land use map for VA project.
Posted by AlamedaPointInfo.com at 12:00 PM